The Aberdeen Angus, sometimes simply Angus, is a Scottish breed of moderate sized beef cattle. That derives from cattle native to the counties of Aberdeenshire and Angus in north-eastern Scotland.

The Angus is naturally polled and solid black or red, though the udder may be white. The native colour is black, but more recently red colours have emerged. The United Kingdom registers both in the same herd book, but in the United States they are regarded as two separate breeds: Red Angus and Black Angus. Black Angus is the most common breed of beef cattle in the US, with 332,421 cattle registered in 2017. In 2014, the British Cattle Movement Service named Angus the UK’s most popular native beef breed, and the second most popular beef breed overall.

In 1876 William Brown, a professor of agriculture and then superintendent of the experimental farm at Guelph, Ontario, was granted permission by the government of Ontario to purchase Aberdeen Angus cattle for the Ontario Agricultural College. The herd comprised a yearling bull, Gladiolus, and a cow, Eyebright, bred by the Earl of Fife and a cow, Leochel Lass 4th, bred by R.O. Farquharson. On 12 January 1877, Eyebright gave birth to a calf, sired by Sir Wilfrid. It was the first to be born outside of Scotland. The OAC went on to import additional bulls and cows, eventually began selling Aberdeen Angus cattle in 1881.

Because of their native environment, the cattle are very hardy and can survive the Scottish winters, which are typically harsh, with snowfall and storms. Cows typically weigh 550 kilograms (1,210 lb) and bulls weigh 850 kilograms (1,870 lb). Calves are usually born smaller than is acceptable for the market, so crossbreeding with dairy cattle has been used for veal production. The cattle are naturally polled and black in colour. They typically mature earlier than other native British breeds such as the Hereford or North Devon. However, in the middle of the 20th century a new strain of cattle called the Red Angus emerged. The United States does not accept Red Angus cattle into their Black Angus herd books, while the UK and Canada do. Except for their colour genes, there is no genetic difference between black and red Angus, but they are regarded as different breeds in the US. However, there have been claims that black angus are more sustainable to cold weather, though unconfirmed. The cattle have a large muscle content and are regarded as medium-sized. The meat is very popular in Japan for its marbling qualities.

The main use of Angus cattle is for beef production and consumption. The beef can be marketed as superior due to its marbled appearance. This has led many markets, including Australia, Japan and the United Kingdom to adopt it into the mainstream. Angus cattle can also be used in crossbreeding to reduce the likelihood of dystocia (difficult calving), and because of their dominant polled gene, they can be used to crossbreed to create polled calves. 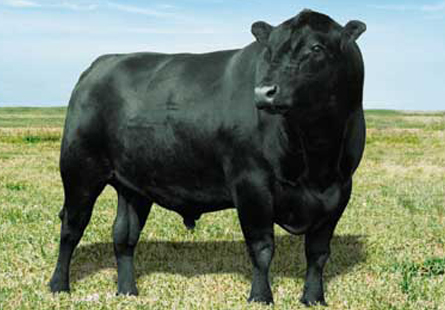